Here are some examples of projects that were created in the 2020 Designing Physical Interactions for Music workshop.

If you made something in the workshop and would like to share the link, please get in touch with me and I will make sure to post it here.

The TILT-A-PLAY is a device which can add effects and filters to instruments using rotational gestures from a hand. Any instrument and any rotational (non-toggle) effect or filter can be used. With an accelerometer, the TILT-A-PLAY determines the orientation (pitch, yaw, roll) of the hand which is then used as a parameter to control the sound. For example, the pitch of the hand could change the amount of wet mix in the reverb. This project uses Teensyduino, Max MSP, and Logic Pro/GarageBand.

“Various nature-inspired and dynamical systems algorithms. + a music tracker, directly imported from the 90s.
Both projects based on LCD and touchscreen.”

Project 2: 8-track music tracker, similar to the trackers from the 90s,
with additional functions: note probabilities, randomization etc…
Control via touchscreen, pots, and buttons.
Midi over USB. Main functions run as an interrupt, for precise timing.”

Drum machine which you can program like a normal drum machine, or as a map of probabilities.

This is a work-in-progress demonstration of a turntable inspired, semi-autonomous, robotic instrument. 6 knobs control parameters related to the location, movement, and speed of two contact microphones raised and lowered above a rotating acryllic disc.

Ribbon Control of Audio Synthesis from Kevin Haywood on Vimeo.

Ribbon interaction (no audio) from Kevin Haywood on Vimeo.

I’m using an LED light strip to visualize a simple physical model which is running on a Teensy microcontroller, with one ribbon controller, two potentiometers, and two pushbuttons as input. The real-time data from this system is used for simultaneous control of audio synthesis.

The system models two rotating discs, which are depicted as groups of blue and red lights along the single dimension of the LED strip. The blue disc is smaller in diameter, and appears as if positioned in front of the red one, occluding it. The ribbon controller is situated adjacent to and in parallel with the LED strip, and tracks the position and lateral velocity of any single touch. In conjunction with the two pushbuttons, the ribbon can be used to alternately rotate or translate either disc. Each disc has an independently definable coefficient of friction which can be varied in real-time through the use of the potentiometers, where a zero friction state allows for any applied motions to cycle indefinitely.”

aural360 is a mobile application that can spatialize audio without VR/AR gears or SDKs. It uses the built-in magnetometer and accelerometer sensors in smartphones and tablets to control the 360-degree audio panning and 3D position. The application was written in Xamarin, a cross platform development software, and the audio was spatialized using the Facebook Audio 360 and AVFoundation SDKs. 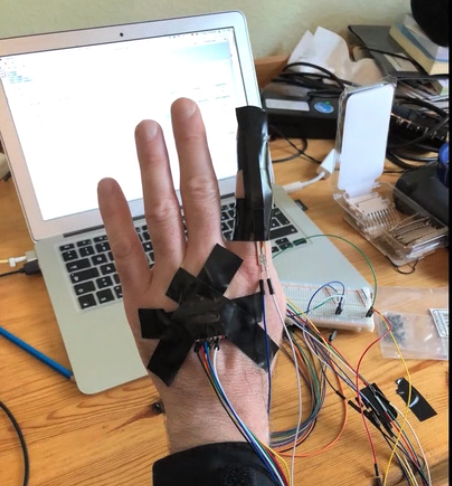