Sonic Windows is an immersive sound environment. A meditative space that allows listeners to unplug from their audio devices and into the constant, ever changing soundscape underwater.

Using home built underwater microphones which are installed in pairs (to create a live, stereo feed), participants can listen and enjoy the sonic environment in a way which is otherwise impossible with our air-tuned ears. Taking inspiration from sailors ditty boxes, we’ve built the listening station boxes from timber reclaimed from a 60 year old boat, abandoned in the San Francisco Bay. Listeners can plug their own headphones into these boxes or use a pair provided.

Sasha and I live on a 36 foot sailboat in the heart of San Francisco Bay. The ocean is a huge part of our lives: working on commercial sailing vessels, diving, and recording whale sounds in Monterey Bay. We often find ourselves sitting on our boat listening to the constant, sometimes subtle symphony of sound that rattles around the resonant fiberglass shell of our boat: trying to decipher the sounds, speculating on the origin of tiny clicks and taps that sound all over the hull. There is no silence on a boat, even in the stillest of waters. The movement, the symphony is never ending. It lead us to want to know more about the underwater sounds so we decided to create Sonic Windows - a personal, intimate opportunity to meditate on the music of the ocean. 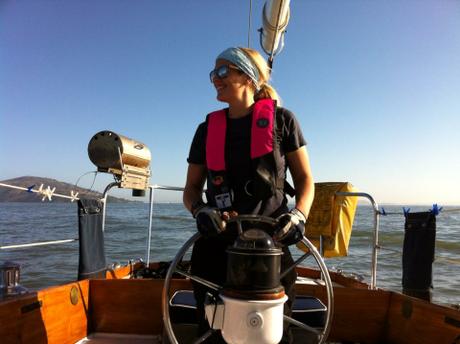 Jessie at the helm of our boat & home, Hedwig.

One of the issues with sound underwater is that it travels five times as fast in the dense ocean than it does in the air. Consequently humans struggle to perceive distance, and orientation when they’re hearing underwater. Our ears are tuned to hear in the air. We perceive the distance and orientation of sound by the time it takes for sound to travel from one ear to the other, but because sound travels so fast underwater our ears get confused so we can really only sense if something is really close, or really far away. We’ve rectified this by creating a stereo array of two hydrophones (underwater microphones) spaced about 5 head widths apart. This slows the sound enough between a humans ears to allow them to perceive distance and orientation.

We are using homemade hydrophones, based on a design that Sasha has been using to teach her students about field recordings for a number of years. The beauty of the design is that they are relatively cheap, really robust and quite streamlined. 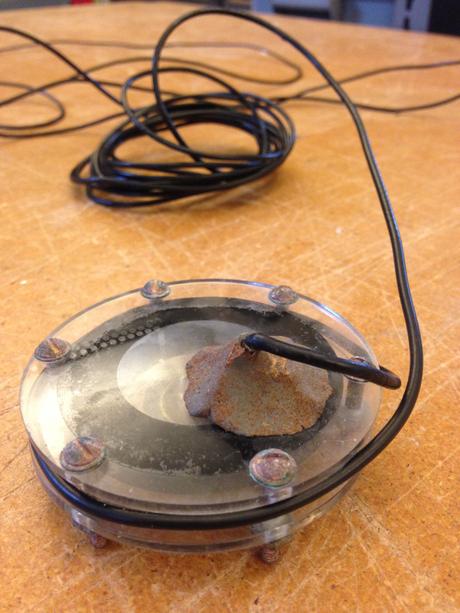 Sasha is in charge of the electronic aspect of the project. We wanted the system to be as simple as possible so that we could install the boxes almost anywhere, without drawing a huge amount of power whilst managing to keep the system running 24 hours a day. Sasha created a design that took in the two hydrophone channels, combined them into a stereo output, added a limiter (so that we can protect people’s ears from big noises and added an internal volume control. One of the greatest problems was wiring things so that any headphones could be used to listen. Iphone headphones have a particular wiring system (because of the added microphone which makes it harder to wire a stereo output for those particular headphones). Fortunately we figured out this problem so most headphones are now compatible. We decided to house the electronics in a watertight lock&lock container, which are easy to access, cheap and waterproof. 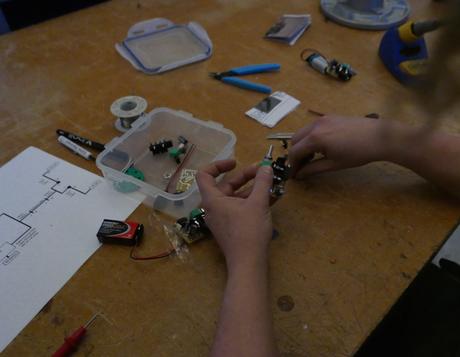 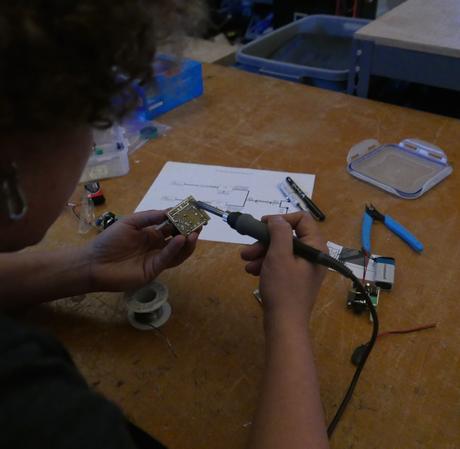 Sasha soldering the circuit board.

After everything was basically running we headed to K-Dock at Pier 39, famous for it’s sea lions and its tourists. We ran tests on the limiter, hydrophones and the anchoring system and made sure that listeners understood (with minimal instruction) that they could plug their headphones into the box. We learned a lot that day about how different environments affect listeners willingness to stay with a quiet, reflective activity, amidst the hustle of a psuedo amusement park. We ended up making a few adjustments to the limiter and the hydrophone depths, but for the most part everything ran well and we were really stoked. 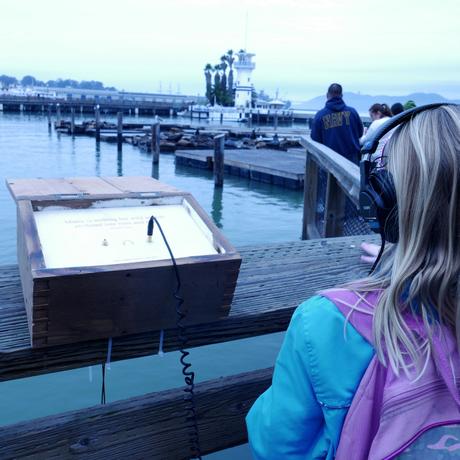 A young listener, with the Pier 39 Sea Lions in the background

We wanted the listener to have a personal experience with the ocean, which is why we used headphones, and not a speaker with a live feed blasting the waterfront. This however, meant creating some kind of box which would entice people to open it, unplug from their personal electronic devices, and plug into the sounds of the ocean. During our research we came across a lot of sailor’s ditty boxes. A ditty box was basically a small, plain wooden box that sailors would have on board a boat in order to keep their personal effects in and so it became the basis for our installation. We made each of the boxes by hand, using techniques that have been around for hundreds of years.

Examples of the 'Sailor's Ditty Box'

We wanted to use materials that already held stories within them, so we sought out a boatyard in Sausalito that is responsible for dismantling old boats. Sausalito had a long history as a ship building location, and is now home to some of the Bay Areas most beautiful yachts. We were really fortunate to be given a bunch of wood from a 60 year old pleasure craft that had half-sunk and was abandoned in the Sausalito channel. The wood was of course covered in mud and sea creatures, but fundamentally it was sound and so we had our basic material. 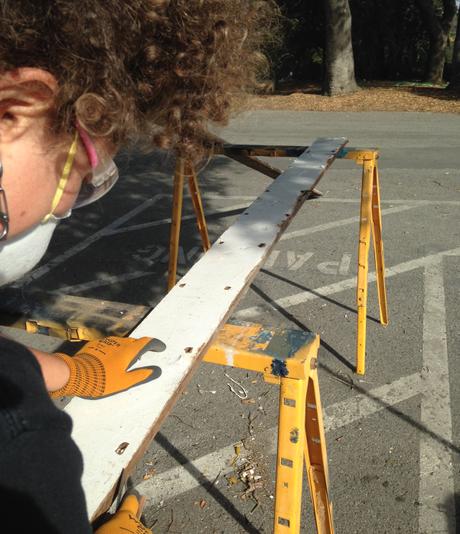 Sasha beginning to clean up the mahogany planks. 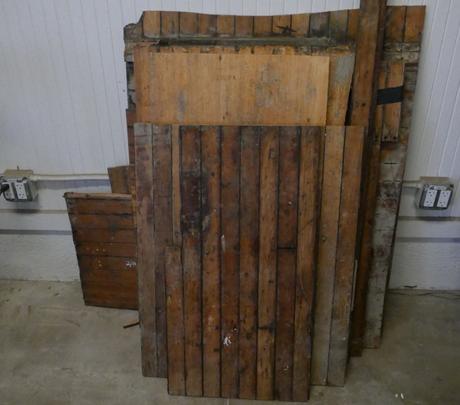 We wanted the boxes to feel as though they held the stories of the sea, so we made them by hand: a pretty big undertaking given that the wood had been largely underwater for most of its life as a plank on the outside of a boat. We decided to make the first three boxes out of the long mahogany planks, because they were the most workable and the least warped. We’re planning on getting to the teak decking later in 2016 for another installment. We stripped the wood, leaving some paint on the inside of the boxes as an homage to the pain that is painting the hull of your boat (we’ve been there and it is brutal). We created dovetail joints so that the boxes required little (if any glue) and then covered the raw wood in tung oil which is Jessie’s favorite option for sealing wood and creating a natural finish. 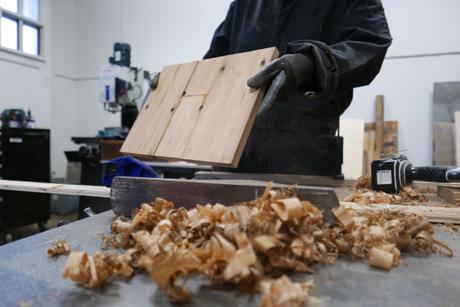 Planing the lids for the boxes. 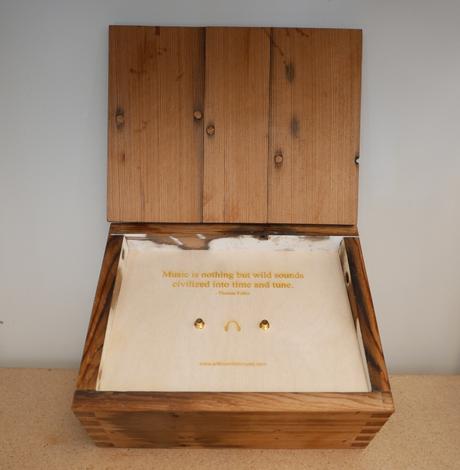 The finished product: our version of a sailor's ditty box.